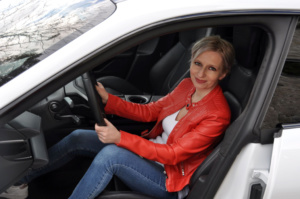 Ursa Prosenjak started her career as a journalist during her college years. Her first work experience was on local radio and television stations, and with the rise of digitalization, her career also turned in that direction. After a few years of working for general online media, she specialized as an automotive journalist. She started working in this field at the automotive web media Avtomanija, where she soon took over additional duties of the editor for the Formula 1 topics. Later they designed the project Njen avto (Her Car), intended for women.

«As one of the few women in the world of motoring in Slovenia, I have identified a gap in this area – despite the large number of female drivers and the large number of women interested in cars and motorsports, there is no voice to represent them, and no one to address this specific demographic. In the automotive world, there are still many prejudices and stereotypes associated with women, which we want to disprove with the team and normalize the position of women in this field».

I have always been interested in cars, so it seemed a natural way for me as a journalist to tackle this content. I like to be able to contribute to greater traffic safety with my work, but I also like to learn about the innovations of automotive technology. As a woman in a predominantly male profession, I want to present my authorial content in a different way, from a different point of view.

Avtomanija is the oldest automotive web portal in Slovenia (established in 1998), covering a whole range of petrol matters, from motoring, F1, WRC, MotoGP and so on. In the period from 2000 to 2010 it was also published on paper, from 2006 to 2010 it was published weekly and it was the only automotive weekly magazine in this country ever. On the other hand, Njen avto is a developing project designed a few years ago. The idea of the project is women authors creating content for (especially) women, offering their own views on motoring and motorsport, redefining the role of women in this traditionally male topic and exchanging experiences and knowledge.