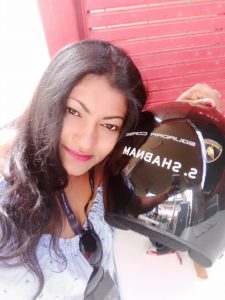 Sheren Shabnam from Dubai is the Editor-in-Chief of Millionaire magazine, a role she has held for the past 16 years. She is also a prolific luxury and lifestyle motoring writer for various publications around the world. Furthermore, she writes for leading regional (GCC) public relations agencies and contributes to Executive Women, Capital Business, 800 Lifestyle, Trending Business Insights and MADAME magazine.

She is based in Dubai in the United Arab Emirates (UAE) and in Spain but is originally from the Coral Coast in the Fiji Islands where she completed her high school years. She has a Bachelor of Mass Communications (BA), a Bachelor of Human Sciences degree, and gained her Masters in World Literature from Malaysia.

Shereen has considerable experience with women’s business groups and is the only woman jury member for the Middle East Car of the Year awards (MECOTY).

Her interest in cars was generated by her family where she grew up surrounded by all things automotive: “My Dad enjoyed opening up old cars and putting them back together again. My brother used to draw intricate posters of race cars as well, so our room was full of cars while our terrace and yard was filled with car parts,” she says.

In motoring terms, Shereen is a pioneer in her region: “The UAE area is going through a change after Saudi Arabia announced women will be able to drive soon. The dynamics are changing rapidly for the automotive industry with this announcement and we are seeing more female car enthusiasts among the younger generation than ever before. “It helped me being accepted into MECOTY after 19 years of driving with male automotive media and after breaking glass ceilings in the region by convincing manufacturers that women drivers count.”

She says being on the international panel of Women’s World Car of the Year further cements the message that women in motoring are important –  not just as drivers of personal cars but as the decision-makers for family cars. “I felt very limited in providing a women’s perspective on cars before, so being on this panel gives me access to a wider audience and connects me to like-minded women in other parts of the world,” she says.

Shereen is also on the Editorial Board of various international magazines and is a Board member of Corvette UAE Club. She loves writing – hence her high-volume output – as well as traveling, yachting, racing, and going for road trips in her Porsche Cayenne Turbo.