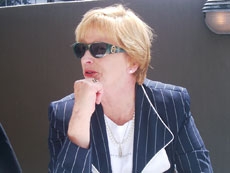 She is a former British and current NZ economy driving record-holder and an award-winning journalist.  Sandy is an established author having written 50 Years on Track (Hodder Moa) Holden (Holden NZ) From Indy to Indy, Scott Dixon (Hodder Moa), The Rat – The Paul Radisich Story (Harper Collins), the E-book Never Raced Rolled or Rallied and a New Zealand book on a counselling service called Whanau Tautoko.

Sandy has three sons and two grand-daughters. She has lived most of her life in New Zealand. She spent six months in London in 2007 to research for one book and returned again to London in 2009 to concentrate on the Women’s World Car of the Year. The first presentation of the supreme award winner was at Jaguar’s Knightsbridge boutique showroom.  Sandy returned to New Zealand in 2010 and lives in the beautiful Bay of Islands.

Today she is semi-retired and has her own website, Wenches on Adventures covering cars, food, travel which she writes in conjunction with a journalist from Sydney, Australia.