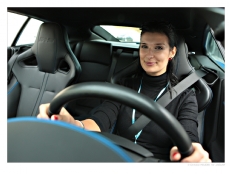 She is one of the country’s highest-profile women motoring journalists and founder of the independent online magazine Žena v autě. When Sabina was studying at the Institute of Communication Studies and Journalism, at Charles University in Prague, she focussed on stereotypes in society for the publishing house, Srdce Evropy.

One prevalent stereotype presents female drivers in a negative light and she strongly disagreed with the statement that women are bad drivers. In 2007 she did some research and concluded that an online magazine aimed at female drivers would be welcomed.

Today, in addition to her role as Editor-in-Chief of Zena v Aute (which in English means ‘Women in the Car’) which this year celebrates 12 years of operation, she is a member of the jury that votes for the Czech Car of the Year.  She regularly tests new cars and concentrates on topics that interest women such as road safety and child safety.

She says that in the Czech Republic, 48 percent of driver license holders are women and they make the main decision when it comes to buying cars for their families.

On being appointed to the jury for Women’s World Car of the Year she says it’s time for female drivers and the awards to be more recognised. “I’m glad to be able to co-operate with women who have an interest in cars, and we can build on that spirit and bring it to the Czech Republic.”