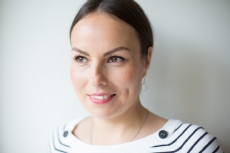 The first Russian to join the jury of Women’s World Car of the Year in 2018 has considerable experience as a journalist and a racer. Olesya Repkina lives in the capital city, Moscow. She began writing in 2003 for a lifestyle magazine and rapidly became an innovative automotive journalist specialising in women and cars by starting the first, and only, auto magazine for women in Russia – Women on Wheels. As such, she was a catalyst for changing what she says is the ‘conservative angle’ of automotive media in her country which until then was considered a male-only domain.

Olesya later became an editor at Automobili magazine, a columnist at CAR magazine, a contributor to Vogue and Glamour magazines, Esquire and the Robb Report, Motor, Kommersant Autopilot, RBC Style and SNC to name just a few of the publications she has contributed to. For several years Olesya worked as a deputy editor-in-chief in L’Officiel Voyage. And currently she is a deputy editor-in-chief in R Flight, where she also covers the cars section indeed.

She began racing as an automotive journalist when she was invited to car brand driving schools. “At the time there was too much attention on me and my abilities from my male colleagues so there was no other way for me than to be very good, and to try to prove I can at least be as quick as many of them,” she says.

She was. She entered the Mazda Sport Cup for advanced amateurs and automotive journalists and with her teams won the Cup three times. Her prize was a trip to the Nürburgring Circuit in Germany, Spa Francorchamps in Belgium and Circuit Zandvoort in Netherlands. “I had the chance to drive at those circuits under the control of professional racing instructors like Oleg Kesselman who is very well-known in this part of the world and is currently President of the Porsche Club in Russia.”

Olesya says being on the jury of Women’s World Car is important for two main reasons: “For me personally it means my efforts are rewarded by having my professionalism recognised. It’s an honour and probably an advantage in the next steps of my career. For Russia, is means a woman’s voice about cars exists because it is currently not that evident.

“Having a Russian presence on the jury of a world panel will perhaps influence other female journalists, mostly in glossy magazines, to develop if they want to write about cars.”

🤪 Some news of Nadine… and the Girls On Track

🤪 Some news of Sabrina… and the Belgian GP F1

😜 Some news of Paola… and the Supreme Winner