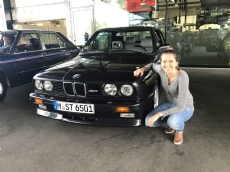 Michelle Ferreira from São, SP. Brazil, has joined the jury of Women’s World Car of the Year. She is a reporter with the prestigious Autoesporte magazine and is high profile within her country as one of the few women motoring writers there. She began writing about cars as an intern for Editora Globo in 2012 as a trainee in Autoesport magazine. She worked with a business magazine, Grupo Globo, for two years before returning to write about cars in 2016 with Autoesporte¸ where she has remained.

Michelle writes reviews for the magazine and website and produces ‘all kinds’ of texts about cars. From YouTube she records videos every week and has built up a following so that Autoesport channel has more than 100,000 followers.

She does not have a family background in motoring or motor racing, so her achievements have been won entirely on her own. She says, however, that her mother, father and grandfather ‘love cars’ so there may be a vicarious family connection. In fact, she says it was they who influenced her decision to think about cars and to eventually write and broadcast on the subject. Her father is particularly passionate about Mercedes, she says.

On being a woman motoring writer in Brazil, she says most of the time it’s easy. However, there is a caveat. “I think it’s necessary to prove more than the normal, to conquer your work space and your audience. It is often necessary not to care about any rude or sexist comments because, fortunately, they are in the minority.”

In me civvies! 💖 @nadine_drives My review of th