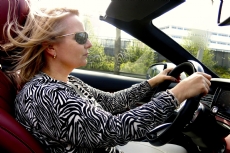 Mervi is a freelance writer and a member of the Association of Car and Motoring Journalists of Finland. She lives in the city of Jyväskylä in Central Finland.  Jyväskylä is the rally capital of Finland, home to the WRC Neste Rally Finland also known as The Rally of The Thousand Lakes since 1950s.

Mervi writes columns, car reviews and motoring articles mainly to the car & traffic section of Keskisuomalainen, which is the third biggest media company in Finland with over 90 print and digital media channels.

She loves new adventures and driving challenges such as the BMW Winter Driving Experience.  She has tested Nokian Tyres in their extreme ’White Hell’ centre in Finnish Lapland and has driven hot laps on Bridgestone’s racing test track in Rome. ”I’m a bit of a daredevil. One of my happiest and fastest memories dates back to 2015 when I had a co-driver experience with WRC driver Hayden Paddon from New Zealand, in his Hyundai i20 WRC.”