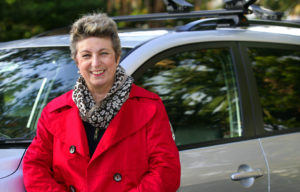 Liz Swanton has more than 20 years’ experience in a career that includes working in Australian newspapers, radio, TV and magazines, and as a freelance writer and PR consultant. She began writing about motoring and motorsport in 1993 for The Sydney Morning Herald and continued for the next 10 years as a motoring writer for publications including MOTOR, Motor Racing Australia, Australian Auto Action and RALLY.

Liz’s motoring CV also includes three years providing a motoring column for the then-Kerry Packer-owned SHE magazine, and for two years a quarterly motoring supplement for VIVE magazine, then an inflight publication for Ansett.

She has also written for a range of contract and in-house magazines including trade and customer magazines for Hyundai, Toyota and Volvo, motoring stories and columns for business magazines such as accountancy publications In The Black and Money In Practice, and was a long-term member of the editorial team which produces The Great Race, the official history of Australia’s famous Bathurst 1000 race.

Public relations clients have included national and state motorsport events, a driving school and a tyre retailing franchise group. She handled media for many years for former Junior WRC competitor, Molly Taylor, and off-road/Dakar racer, Bruce Garland, and for the last six years has been a key member of the media communications team behind the Australian round of the World Rally Championship.

Aside from her motoring/motorsport bona fides, Liz Swanton has worked as a writer, reporter, sub-editor, editor and public relations consultant across a wide range of other areas including travel/tourism, law, DIY and gardening, industrial relations, the convenience industry/FMCG, food/restaurant reviews, finance, news and current affairs, real estate and pets!

This is not her debut with WWCOTY, but a return to the fold. She was a founding member of the judging panel in 2009, reluctantly relinquishing the position in 2013, when she started worked as PR and media liaison in Australia for Bentley Motors. She resigned from Bentley in 2015.

“I am delighted to be back,” she says. “And I’m looking forward to reviewing the cars that work best for women and their busy lives. “It’s interesting to note that while the automotive industry acknowledges women have a direct or indirect influence on around 80 per cent of buying decisions, they are under-represented on the judging panels of most major car awards.

“It is fantastic to see how car companies around the world now acknowledge the importance of WWCOTY and value the integrity of its voting procedures.”