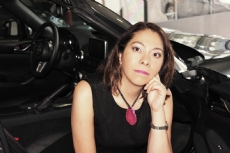 Isabel has been working in the automotive industry since 1998. Her first three jobs were in magazines specialising in freight transport and in 2003 she became Editorial Director specifically to start the Netcar website where she still works.

In addition to that, she has collaborated in producing an automotive supplement of the newspaper El Economista and the magazine Alto Nivel. Recently she joined her husband to start their own business with a magazine called Motores Driving and a radio programe, ABC Motores.

Her family life has always been geared to cars. Indeed, she met her husband 16 years ago while covering an automotive event so their shared passion for cars continues and extends into family life. Her perspective on the automotive industry in México reveals a country divided in terms of purchasing power.

“The country is the sixth largest of the region and the fourteenth in the world so it has very different customs, cultures and needs,” she says. “For example, from the middle of México to the north there are many single mothers and women because most of the men to go work in the United States. “That means little by little women have gained a higher level in corporate life and occupy important positions which gives them greater purchasing power to buy cars and they have many needs to be fulfilled by those cars. “But from the middle of México to the south it is different and this society is still dominated by male decisions, although even that is changing a little.”

For those reasons, she views joining the jury of Women’s World Car of the Year as important for the women of Mexico. “By working hard, they can achieve a better place in their work and professional area and it means that my words and advice to women on cars will have greater significance. “Their decisions while buying a car should not be limited to space and pure design, there are many other functions that need to be considered by women in my country such as safety, fuel-saving, technology and so on. That’s why it’s an honour to be part of the jury.”