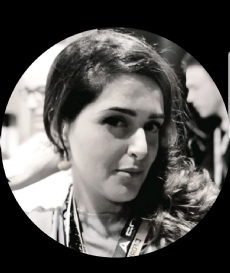 Ilaria is working for La Repubblica, Cosmopolitan Italia, Missionfleef, Chiechi.it and she is codirector of Donneinauto as well. She also started discussing women and cars on Donneinauto because she felt it was important to her as a woman and automotive journalist. She shares the editorial content with Monica Secondino co-founder of website, worker in high finance during the day.

Ilaria was born in Rome and now divides her time equally between there and Milan. Her house is in Fiumicino, near the sea, which she says is a ‘perfect place to write and to test new products’.

She grew up in a home where cars were always discussed. Her uncle owns a large garage and her father picked up knowledge from that business. Her own involvement with cars at that stage was minimal. However, she says because at home cars were always seen as a male prerogative, it later turned out to be a help to her.

Ilaria’s first experience with motoring came when she was an intern with a television editorial office. “I worked for an organic food program and when it was finished, they sent me to help a cameraman; we had to shoot images of a new BMW Z4 and I drove for hours! That’s basically when my journalism career started.”

After several online internships, her first foray into writing about women and cars came with the La Repubblica’s website after a conversation with the editor-in-chief. “We talked about my degree thesis in journalism that investigated the apparent pornography used in online newspapers. Women were exploited in the search for traffic. “He was enthusiastic and suggested I write a book about it but, in the meantime, he asked me to join a new category on engines in the website called Wrromen that would investigate the relationship between women and automotive.

Ilaria is still working for La Repubblica today. The editorial staff employs freelance motoring writers, each with their own speciality area, even if she admits she is still not sure what her speciality area is! “If there’s a new city car or a minivan to test, or a track day, I almost always go because I think the greatest quality a woman can have is versatility.”

Being on the jury of Women’s World Car of the Year will give her the opportunity to express her opinion, and to publicize the award within Italy. “It seems incredible, but it has been discovered in Italy that women actually buy cars and that a woman’s opinion has a new value and considerable cachet.”