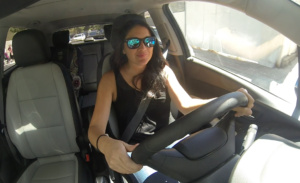 Francisca Muñoz Matus is the founder of the first media outlet in Chile to examine the auto industry from a female perspective. She is now a member of the jury panel of Women’s World Car of the Year which will considerably strengthen the awareness of the awards in South America. Francisca has been working in the automotive world for nearly nine years. She was part of the writing staff of Automóvil Panamericano magazine, a Chilean franchise of the magazine that originated in Mexico.

“At that time I became aware of the small space we had as women in the segment. Although the car brands have advanced since then they still think mainly of men in their publicity and the way in which they sell a car. The information is delivered on the assumption the audience is composed only of men,” she says. “That’s despite the influence of women in the decision to buy a family car or the fact their purchasing power has increased,” she asserts.

These were the reasons she decided to create AutoMujer in a previously unexplored market in Chile but with potential that continues to grow. She says it’s important to expand the impact of this platform and it gives her the opportunity to develop personally as an automotive specialist.

AutoMujer is already three year old, and continue growing day by day, and to position itself in a great way as an authorized voice within the Chilean automotive industry.

Francisca lives in Santiago where she studied journalism at Universidad de Chile. Her partner, Mauricio Monroy, is in a similar line of business. He works for the national media outlet Motores de La Tercera.

The automotive market in Chile, as in many countries, is very competitive. Francisca says there are more than 60 brands available and AutoMujer comes to offer a different look, made by a woman, but not only thinking about them, but also in those who are looking for a practical and functional style to see the Chilean automotive market.