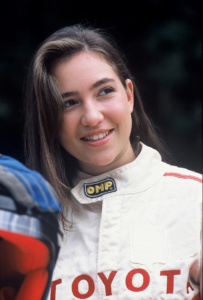 Christina specializes in Automotive news and international motorsports. She writes for the important automotive website MotorOne.gr contributing various news on the industry, as well as car presentations, test drives and interviews. In collaboration with several other media (weekly newspapers and radio shows), MotorOne.gr journalists participate in their Automotive section.

Christina studied journalism while she was participating in the national Kart Championship and Trofeo Cinquecento. Later she continued rallying and racing and became the only Greek female driver to participate eight times in the WRC Acropolis Rally. She finished four times and has two records which she still holds to this day.

She has worked as a journalist and reporter for television, newspapers, internet sites and magazines since 1999. For seven years, while she was working for Car and Driver Greece, her job was European and world car presentations.

She is the first and only female member of the Hellenic Association of Car and Motorcycle Editors. Christina also is the president of StAr, a Non-profit Foundation for Road Safety her father created.