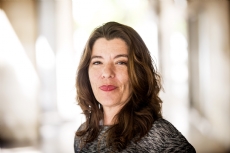 Carla Ribeiro says she has been passionate about cars, and everything that involves them, since she can remember. “The beginning of this adventure was by accident in 2003,” she says. “I had already covered motor sport for the Portuguese daily, Público, and was writing about economics when I was called to attend my first presentation of a car model.

“The truth is that in those days I would spend more of my free time in automobile repair shops and on racing circuits than in cafés or bars. I only began writing regularly about cars in 2011, elaborating with weekly reviews and news on the car market.”

Carla currently writes reviews on new models for Público and for the magazine Todo o Terreno. She pens articles for the Portuguese version of the Kelly Blue Book website and for the past four years she has been a jury member for the annual Portuguese Car of the Year. Her writing repertoire also includes travel pieces.

Her ‘transition’ from being a motor sport journalist to a motoring writer hasn’t diminished her love for cars even if she is one of the few women in Portugal covering the car industry and newly-launched vehicles. “In Portugal, you still often hear things like ‘that’s an awful driver, it must be a woman’ so it can be a challenge to write the sort of information that is usually written by men for men,” she says.

She has three children – a 12-year- old girl and 8-year- old twin boys – and as any parent knows, they can be the best teachers. “I can rely on the verdict of my kids about the cars I drive, they always surprise me with their fine judgement.”

Carla says the rapid evolution of the motor industry means writing about cars gives her the chance to learn daily, which she describes as giving her “enormous pleasure”.

She says her appointment to the jury of Women’s World Car of the Year is “a great honour” and believes the women on the jury in total can make a “real difference” to the motor industry.