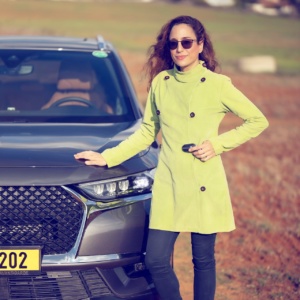 Anat Daniel from Israel has a solid and comprehensive background in journalism and completed much of her training in what could be called the ‘traditional’ way. She started writing for small newspapers before the age of 18 years, covering current affairs and news before moving on to the newspaper at Ben Gurion University where she studied communications. She later worked for Radio Darom where she wrote and broadcast news items.

Then came the move from Arad to what she calls “the big city” – Tel Aviv – where she began writing about entertainment for Israel’s most popular newspaper, Yedioth Ahronoth.

Anat has always had a love of cars. In fact, as a small girl, she knew exactly what badges and symbols belonged to which cars and she began ‘by chance’ to write about cars for Avis. “I was looking for a role in marketing and social media and that lead me into the automotive world and the job of my life,” she says.

That was almost ten years ago. She wrote about second-hand cars for a blog for women she started called Queen of the Road. She took that blog and brand with her when she became an independent journalist.

Today, she continues her automotive writing and editing with Queen of the Road, that has grown to become an impressive and popular website. She participates in TV shows, videos, in which she talks about the automotive world. Manage Car Vlog on YouTube.

“I love cars and I truly love my day job because it makes me happy and unique. I have a successful website and popular social networks and get love and appreciation from my virtual audience every day.” Anat Daniel says there are ‘dozens’ of women working in the automotive industry in Israel, from CEO level, to managers and marketing women to those competing in motor sport.

She lives in Ramat HaSharon with her son, Adam. She says joining the judging panel for Women’s World Car of the Year is special because it is unique and a “wonderful concept”.

In me civvies! 💖 @nadine_drives My review of th