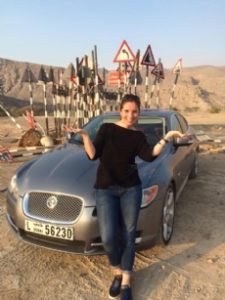 Alix Capper Murdoch has an impressive background in broadcasting, driver training and media communications all connected with motor racing and the motoring industry.

The Scotswoman began her career with the Royal Air Force as a driver before studying media at Aberdeen University. During that time she became the pit-lane commentator at Knockhill, Scotland’s only racing circuit, as well as presenting on local radio.

Between those duties she ran the Clio Cup team, Xcel Motorsport, in the British Touring Car and ASCAR championships until a chance encounter with the GM of Dubai Autodrome saw her move to the Middle East.  She then began life as a racing instructor, host of a motoring radio show and a judge for Autocar M.E. magazine. She also set up and ran the first manufacturer-backed racing championship in the region, the Maserati Trofeo Middle East.

In 2005 she was chosen to host a motoring television show and became the ‘voice’ of GP2 Asia.  From there she worked with Formula One management as official commentator for GP2 Asia and Speedcar.  All the while she continued to teach driving skills and started her own training as a stunt driver and a FIA official.

More than 10 years on saw Alix still working in radio and as an official for most of the track days at the local circuit. She became the most senior female official in Race and Rally Control for most motorsport events in the region including the Yas Marina Circuit (Formula One Chief Coms), the Abu Dhabi Desert Challenge and the World Cross Countries Rally.

During this time, she appeared in no fewer than 20 films and television commercials and became the founder of Women at the Wheel, a course helping women overcome driving fears while introducing them to modern safety features.

As if all that wasn’t enough, Alix continued writing for automotive magazines including Top Gear Middle East and The National, the region’s leading newspaper; she hosted the live stage at the Dubai International Motor Show and two television shows covering automotive topics and reviews on four wheels and two.

Alix was then head-hunted to spend the summer working in Europe as a vehicle product specialist and trainer where she had to deliver a formidable list of all relevant information about new vehicles.

A year ago, Alix launched Miss Auto Know, which she describes as ‘a safe place for women to ask questions, gather information and seek advice on all things auto’. It has grown substantially. “I find myself traveling a lot, writing articles, hosting events and running courses to help women,” she says, almost as an understatement given her (literal) track record.