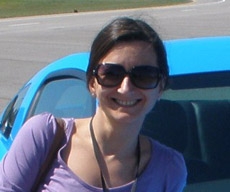 Alicia left her hometown of Puerto Madryn, Chubut in 1994 to study in Buenos Aires. While studying Communication Sciences at the University of Buenos Aires, and journalistic practices carried out in a magazine of alternative culture, she began working as an intern at Buenos Aires Económico in 2000.  A year later Alicia joined the Business section of the newspaper, following themes such as Telecommunications, Real Estate, and later the automotive industry.

In 2008 she became an editor and lead the working group of the new site of Motor Media SA, www.tiempomotor.com, an online journal about everything about the automotive sector at local, regional and global levels. In this process, Alicia was responsible for closing an editorial partnership with AutoData Editor, the leading publisher of Brazil, and the largest in the South American market.  At the start of 2011, besides continuing with the editorial responsibility of the site, she became a partner.

Alicia has collaborated with various publications in the business area and cars as Debate, Bank Magazine, Performance Credit (the first magazine for the credit industry), Password Infobae, Auto Test, MegaAutos, InfoAuto, The Gallery (lifeStyle) and Cielos Argentinos, among others. She has served as a columnist for “Alta Performance”, Radio Palermo and Radio El Mundo (2006/2008) and «Malos y entendidos” (Bad and understanding) on Radio America (2009/2010). Currently she works at Adefa.